Wednesday, February 28 1945 - February 2009 - 64 years later.
As the end of the war drew near, the village of Toblach-Wahlen (see picture) was threatened with imminent danger in the form of a crashing American B24 bomber.

According to the American military archives, the 15th  American Airforce authorized 680 bombers (B24 and B17) in Southern Italy/Stornara to begin attacking the towns of Lienz, Auer, Brixen, Sterzing, Franzensfeste, Bozen and Bruneck on February 28, 1945.  The flying team had always been aware that they were facing an unknown fate, and therefore in their pre-mission briefing they were given specific information about the areas of Bozen, Brixen, and Sterzing, as well as precise instructions regarding the operation and firing of the FLAK batteries that were going to be on board.

9 US Planes were shot down

... and Toblach-Wahlen was indirectly and unwillingly brought into harm’s way of the catastrophy. Along with nine other Airforce soldiers from the 456th BG, William J. Cartwright (see picture) and his plane „Cecilia,“ approaching from the town of Albeins in the south, dropped a load of bombs over the Albeinser rail bridge. The crew watched the FLAK missiles exploding around them when suddenly they were shocked by a hit into the nose of the Liberator B24. The Plexi-glass on the nose of the plane shattered in a thousand pieces so that only a few aluminum strips were left holding the front of the plane together, the bomb bay was torn apart, and Pilot Cartwright immediately began signaling red alert. Adding to the disaster, large navigation problems caused the plane to over-fly Villnöss, with the damaged compass reading north-east.

The First Victim
Bomber Lt. David Lander met a fatal end from his post at the front of the Plexi-glass nose. For a while he had either been able to hang on tightly, or else had not fallen because he was trapped, but in the air over Villnöss/Flitz he was forcibly ejected through the gaping hole that opened under his feet. This was all observed by bystanders in Villnöss/St. Peter, and the unlucky Lt. Lander was granted an honorable resting place in the village cemetery. (see picture)
The Cartwright bomber now appeared to be operating with very limited mobility, the motors were roaring uncontrollably, and the copilot Lt. Andrew J. Cooney hung from his controls, covered in blood. Now the only thing that could save the remaining of the nine men from certain death was a wide, soft open area that would be suitable landing ground for the men as they jumped from the plane.

Panic and cool thinking
best described the feelings among the members of the team (see picture) as they prepared for the jump in the air between Welsberg and Toblach; there was a window of only a few seconds still open for the guarantee of a successful jump, so it had to all go perfectly. To give his copilot the best chance of survival, Pilot Cartwright pulled the injured Cooney out of the plane with him and his parachute. The MG-protected Campbell had to climb over the hole through which Lander had fallen in order to reach his parachute before he could jump from the plane himself. The plane careened out of control in the direction of Toblach, veering dangerously closely to the town of Wahlen as well, and finally crashed into a meadow near the Enzian hut. By some miracle, not even one person or building in either Toblach or Wahlen suffered any damages, although if things had gone differently the village centres could have burned to the ground as a result of the poorly equipped fire department and the harsh winter conditions, which resulted in a lack of water available for use in fighting the fire. The displaced group from Institute of Geografica Militare from Florence was also in danger as their post in the Toblach barracks would have burned to the ground had the fire occurred. 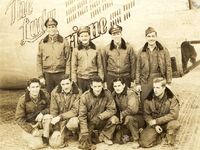 
Found and retrieved plane parts
The type of plane was clearly identified as a B24 using the code GK 32 (see picture). An armor plate fell into a house like an anvil, while in another courtyard a large piece of the landing gear (see picture) and a pneumatic capsule from the plane were discovered. A farmer who was interviewed recently about the crash rummaged through his workshop to show off every one of the ball-bearings that he had collected from the crash and treasured since childhood. 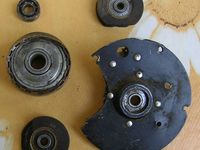 Eye-witness reports and US documents
In Wahlen, two boys delivering lumber thought that their final hour had come as the bomber crashed toward the earth from the air above them; the fire, smoke, spurts of flame, and thunderous explosion that accompanied the crash only reinforced the boys’ initial fright. Shortly after the German soldiers  arrived at the crash site, various looters also appeared, among them school children who had gone in search of sweets and chocolate rather than attending religion class, and in the process stumbled upon the area of the crash. The priest of Wahlen must have been quite angry that he had to search for and worry about his missing students. A parachuter who turned himself in at the Enzian cabin was offered a Tyrolean dumpling as a sign of friendship, but he declined to eat it for security reasons.

Copilot Lt. J. Cooney
was pushed out of the plane, covered in blood, according to the US military document MACR 12840. If reports are to be trusted, someone was found dead amidst the burning wreckage of the plane. What has been confirmed is that a dead American (Lt. Cooney) was laid out in front of the church in Wahlen, and the evacuation of his body in the direction of Toblach was also observed. According to US documents, he was brought to Cortina and buried there.
A persistent rumor has also circulated claiming that the  American (Lt. Cooney?) was shot by German guards. However, the hole in the head of the deceased man was almost certainly caused by a FLAK-fragment; the presence of the dried blood that had apparently gushed from the wound mocked the theory that the death had been caused by burning. And there are some, even today, who believe they had simply seen a black man. The eight surviving members of the 10-person team were inhumanely transported from Bozen to Nürnberg and then turned in at the Moosburg P.O.W. camp. They were held there until the liberation, after which they were allowed to return home to the U.S.

Today in Vermont, USA.
The widow of William Cartwright (the pilot of the fallen plane, who died in 1997), lives in Vermont today. In a personal letter, Pilot Cartwright’s wife mentions her husband’s gratitude toward the German doctors who treated him in Meraner Lazarett. The doctors did such a good job of fixing William’s injured hand, even with the primitive surgical tools that were the only instruments at their disposal, that he was able to continue as an Airforce pilot after the war. He was never aware of the tragic end suffered by his copilot, Lt. Cooney.

Thanks to the witnesses
and the many other interested people, whose help made it possible to clarify the events of February 28, 1945.  However, for the Pustertal two other cases remain unexplained. Who knows anything about a small, American fighter plane that allegedly crashed in the Welsberg-Niederdorf-Toblach-Innichen region, although the pilot was able to save himself with a parachute? Who has information about a plane that actually did crash somewhere in the Stefaner Forest above St. Lorenzen?